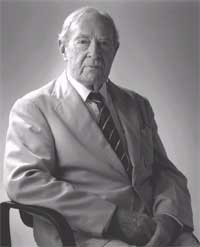 The following text is taken from the first Annual Review (1991-1992) of the Hanson Centre for Cancer Research, which became the Hanson Institute in 2001.

Dr Hanson played an important role in the formation of the Australian Cancer Society in 1960 and he was its foundation Vice-President. He was its President from 1962 to 1964, after which he continued to serve that Society over many years. In recognition of his outstanding service, he was awarded the Gold Medal of the Australian Cancer Society in 1979.

Dr Hanson has also given notable service to many other organisations and in recognition of his extensive services to medicine he was awarded the C.M.G. in 1963.

Dr Hanson has devoted the whole of his working life, directly and indirectly, to the care of cancer patients in South Australia. It is fitting, therefore, that the new centre for cancer research should recognise his major contribution by bearing his name.